Earlier this month I started a Twitter poll about how to support coroutines in C++ Insights. This was to get guidance as showing a lot of behind the scene stuff as usual is more complicated with coroutines. I tried to explain it in a lengthy blog post Coroutines in C++ Insights. Thank you to all the people who took part in the poll and/or give me feedback over various channels.

After 7 days the result is this: 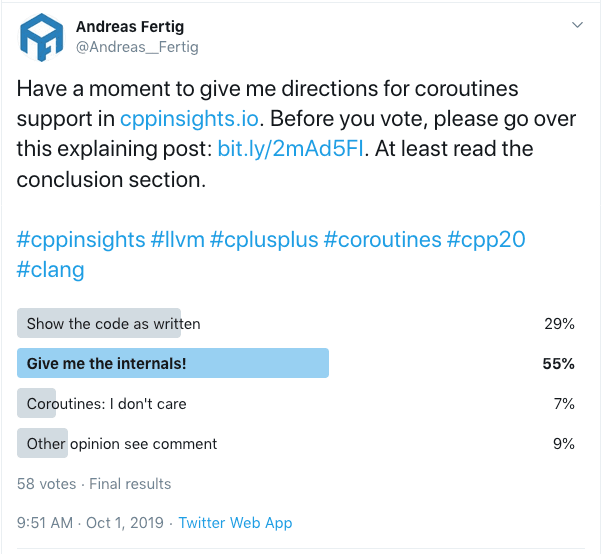 I took my time to reflect over the result. Unfortunately, the result did not turn out as clear as I hoped. Let's have a closer look at the result.

55% votes for "show me the internals", regardless of how correct they are. Roughly 30% would be happy to see them as they are. There are also some other ideas and people who do not (yet) care about coroutines. Maybe, it was too early for some people as coroutines are very new and C++20 is not really released yet. I see some potential, that in a later stage of C++20 more people care about coroutines. But this is just an assumption.

Next, only 58 people voted. While I appreciate that people took their time, this number is quite low to me.

Consensus as per P1000R2 used by WG21 is either 3:1 in subgroups or 4:1 in plenary. With that as a guideline "Give me the internals" did not achieve one of them.

As I expect it to be a significant effort

I interpret this vote as not strong enough to go forward and add support for the internals of coroutines. However, as promised in Coroutines in C++ Insights I will add support to show coroutines as written. I also will keep the code I already have and use it in training classes to see whether it tremendously helps people to understand things.

In case, you have an idea or opinion what would people help to see, a smaller subset of what I showed in the post or annotations of some kind, please tell me.